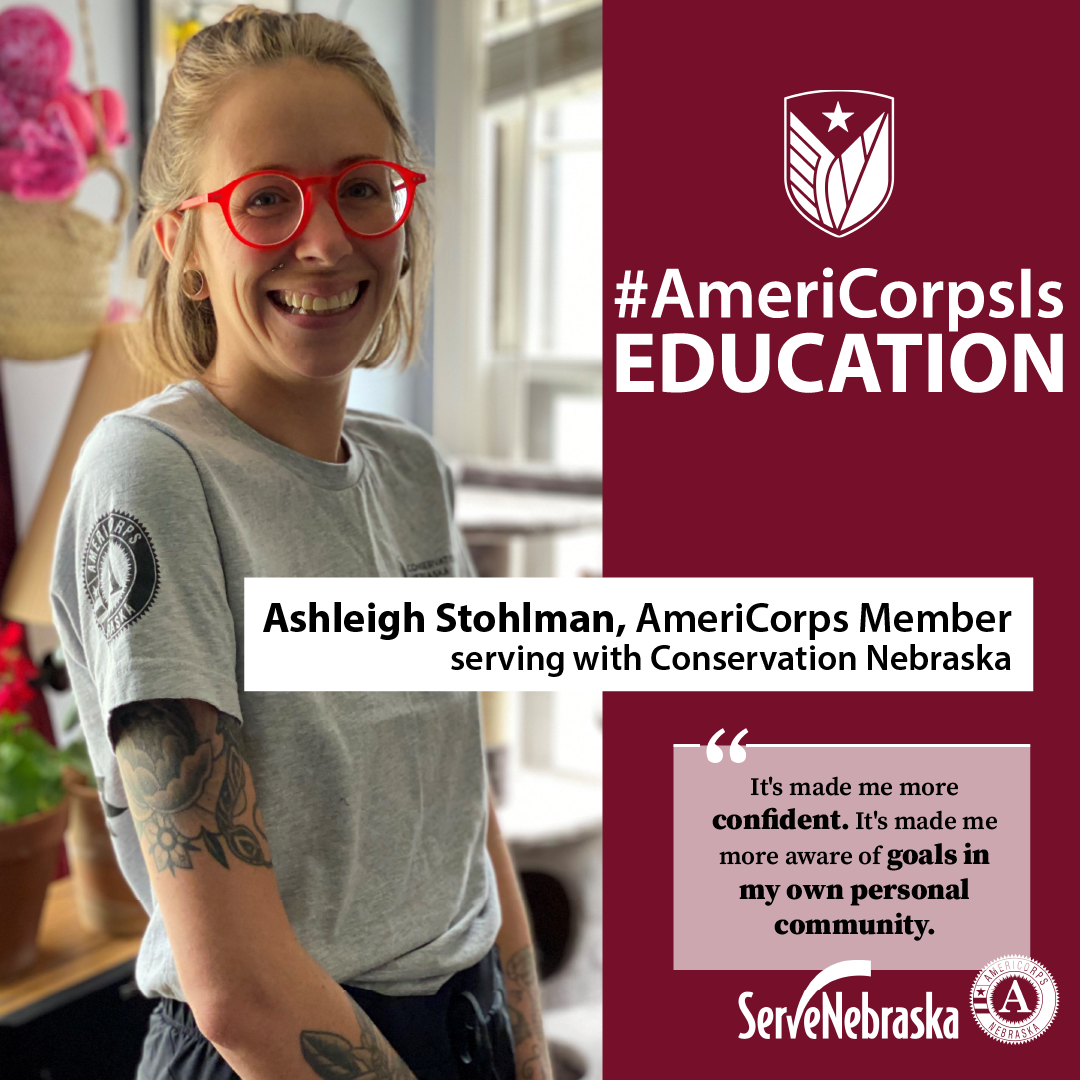 Ashleigh is a non-traditional environmental science student at the University of Nebraska Omaha. She found AmeriCorps when looking for internships or experiences that could guide her towards her calling. She knew environmentalism was her passion, but she wasn’t quite sure where to start. The Conservation Nebraska AmeriCorps program helped her combine a passion for conservation with a skill in community outreach.

She is currently serving her first term as an AmeriCorps member and is considering a second!

ServeNebraska: In one or two words, what is AmeriCorps to you?

SN: How did you hear about AmeriCorps?

AS: My advisor suggested it to me. So just through UNO. His name is Dr. McCarty, he's head of the biology department. I think he had attended a couple of Conservation Nebraska things and just pushed it my way because I had expressed interest.

SN: What ultimately made you decide AmeriCorps was for you?

AS: I had applied for AmeriCorps positions previously, but mostly they would be like traveling to serve in other places, and this was six or seven years ago, so I had no experience, I didn't really know what I was looking for, had never written a cover letter or spoken to anybody.

As my school progressed, I realized there are so many different [AmeriCorps] programs. The community service aspect of it was something I wanted to get into with good structure. And I feel like AmeriCorps brought a lot of structure. So what I liked about AmeriCorps is when I applied, the people that I initially got into contact with were willing to answer questions with me, and I felt like connections with them immediately. And so it was this circle of like-mindedness that I wanted to get involved with.

SN: What have you learned as an AmeriCorps member?

AS: I naturally find myself to be a leader, and I tend to get myself in trouble by not delegating. So I've learned a lot about delegating, and how to be a part of a team. Communicating has been hard, but as long as we can get together, that's been good. I've honed my computer skills, like creating presentations. I was terrified to be on camera beforehand. Learning how to lead interviews has been super beneficial for me because I think it's made me feel more confident in myself.

SN: In your opinion, who benefits most from AmeriCorps programs?

AS: I mean, communities, I would have to say initially. We do as community members and I think Conservation Nebraska because the main thing they want to imprint on us is this opportunity. They give us the tools to be able to go out into our community, engage, but then we also pass those tools along. So say that if I were to end my time as a service member, I would hope that I've impacted a few people in the community and given them the information to be able to spread it to their friends and their family. So yeah, I would just say the community as a whole is the biggest beneficiary.

SN: What were you doing before AmeriCorps?

I did an internship at Fontanelle Forest, but that was just following around a restoration biologist. I've worked in restaurants forever which weirdly has been a nice [connection for] AmeriCorps because I work for a farm-to-table place and so we've made a lot of connections with some of the farmers there to eventually do some Conservation Nebraska talks, which has been super awesome.

SN: What is your average day like as an AmeriCorps member serving with Conservation Nebraska?

So in the morning, I wake up and, on Mondays, I set a weekly goal list. And then every morning, I wake up and write my goals down. Most of the time, the one on ones have been happening any time during the afternoon. So I try to accomplish three a week, sometimes they'll only be five minutes and sometimes they can last up to two hours. It just depends on whom you're speaking with. Lots of human communication with my team. We do a weekly team meeting and then we meet we have office hours with Amanda, our program director at least a couple of times a week. We try to check in with her and make sure that she knows exactly what's going on. But most of the time right now, I do conservation research. I do a lot of surveys or outreach to people on social media, asking what environmental issues or conservation issues are you most interested in, and then once I start to see a lot of people are interested in one thing that will come to the forefront of our next event planning that we're going for.

SN: What is your favorite part of serving as an AmeriCorps member?

AS: Probably the networking thus far, but also just feeling more in touch with my community than I did before. I obviously felt like I was involved, I've been attending some of these cleanups with some of the other programs that we work with directly over the past few years. But now it feels like I'm somebody that is helping directly, which makes me feel confident. And then at the end of my long life, I would hopefully be able to say that I was making a difference like I'm a part of the solution and not a part of the problem, which feels really good.

SN: Do you have a favorite memory of your service so far?

AS: Hmm. I mean, the book club, that's been my personal favorite. Initially, it was started by a different girl that was on my conservation team with me. Obviously, it kind of fell off because of COVID, but then we reached out to a couple of different Facebook groups and just asked to see if anybody would be interested in doing a zoom version. It's meant to be less like a stringent book club and more like a conservation conversation. So even if you haven't read the book, you can pop in and just ask questions. We just kind of help to direct it as the conservation directors. We've had a couple of people from small communities join in or high school teachers that at the end of it were like, “wow, we enjoyed this and we can't like wait to share this with our students.” So as much as those are like small community outreach moments, it feels really positive because it's not people that I would expect to be there and they always say they've had a great time.

SN: Has AmeriCorps service affected your plans for the future?

Well, I might continue with it. It's probably a goal. It definitely helped me tailor where I want to go with my career in a positive way. I didn't know that I would like grassroots organizing and now I really enjoy it and would like to continue down that path. So I guess it's just affected my future in a positive way.

SN: Has AmeriCorps changed you in any way? And if so, how?

AS: It definitely has changed me. It's made me more confident. It's made me more aware of goals in my community, which has been the biggest part of it. It's made me a more organized person. Yeah, ultimately, I guess it has made me think community members are going to be a big way to make a change. As much as it's public policy that needs to be implemented, we still need to get committee members aware of the issues through positive education.

SN: What would you say to someone who recognizes the seriousness of this issue, but feels overwhelmed and doesn't know where to start?

AS: Most of the time, I ask them to take a week of your life and look at how things directly from you affect your environment and vice versa. Because obviously, I get overwhelmed too. There are so many issues that aren't necessarily directly affecting me, but they're affecting other parts. So really look at where you would start to see changes within your community or even within your home, and kind of focus on those and see what small steps you can take personally.

SN: What would you say to someone who is considering AmeriCorps service?

AS: Do it! Apply and get started. I've never heard any negatives, it's always been beneficial. Not only does it look great on a resume, but it also helps you learn from a multifaceted level. I mean, there were things that I never thought I would be doing in my service.

So definitely look into it, do your research, find what programs you're most interested in, and go from there. The opportunities are endless.

*Edited for length and clarity.
To learn more about the Conservation Nebraska AmeriCorps program, click here.

This form needs Javascript to display, which your browser doesn't support. Sign up here instead